A Guide to Ticks and Lyme Disease

Lyme disease is an infection that is caused by bacteria. People get infected when they are bitten by ticks that carry the bacteria responsible for the infection. The infection is called “Lyme disease” because its first major outbreak was witnessed in Lyme, Connecticut. Lyme disease was first noticed in 1975 but the cause of the disease was still unknown at that time. In 1978, it was discovered that people could get Lyme disease when bitten by ticks. Two years later, Willy Burgdorfer found out that B. burgdorferi bacterium was responsible for the disease. Today, most of the Lyme disease infections in the world are found in Canada, Asia, Europe and the United States of America. A lot of work has been done by scientists in finding out more about the causes, signs, symptoms, diagnosis, treatment and prevention of the disease. 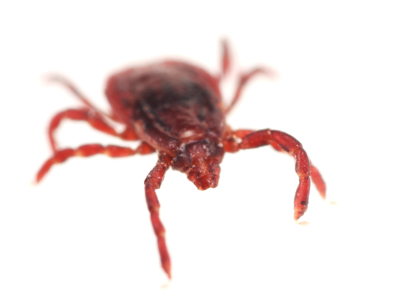 Ticks carry infectious diseases for both man and animals. Ticks usually embed their heads and attach themselves to you, but they can fall off without you knowing you’ve been bit. With ticks that carry Lyme disease, a bite from an infected tick displays a certain kind of skin rash. If you develop the rash, it’s important that you get antibiotic treatment right away because Lyme disease can be painful and debilitating.

Three main types of bacteria that cause Lyme disease are Borrelia burgdorferi, Borrelia afzelii and Borrelia garinii. These bacteria have similar characteristics since they all belong to the same taxonomic group known as genus Borrelia. Borrelia burgdorferi the bacteria that is mainly responsible for Lyme disease in the US while Borrelia afzelii and Borrelia garinii are predominant in Europe. These different types of bacteria are transmitted to humans and animals from infected ticks. Humans get the infection from animals when their meat is not properly cooked before consumption. The two types of ticks that carry the bacteria are Deer ticks and Western black-legged ticks. Deer ticks are more common in the North Eastern and Midwestern parts of the US while the Western black-legged ticks are more in Oregon and northern California.

The cause of Lyme disease is a corkscrew-shaped bacterium, a spirochete called Borrelia burgdorferi. The western black-legged tick, also called the “Deer” tick, transmits the bacteria through its bite. The first case of Lyme disease was chronicled in the town of Lyme, Connecticut in the 1970s and serves as the name for the disease. The deer tick lives across the United States, is hardy and can infect you when it bites.

Days to weeks after the untreated tick bite, the infection can spread to other areas of the body. When that happens the risk factors go up and other symptoms begin to occur. These symptoms result in additional EM sites on other parts of the body. A person can experience facial or Bell’s palsy resulting in a loss of muscle tone in the face. Other risk factors include increased chance of arthritis, sleep disturbance and the onset of problems with your nervous system. 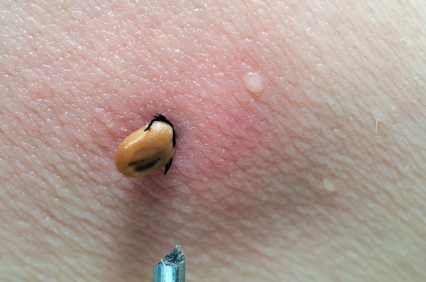 The first symptom of a tick bite infected with Lyme disease is a red circular rash around the bite area. This can appear as a solid red rash or a circular rash that is called erythema migrans (EM) on and circling around the bite. Other immediate symptoms include swollen lymph nodes, headache, fatigue, muscle and joint aches and fever. When you notice this, you must contact your doctor for antibiotic treatment. Antibiotic treatment will stop the bacterial infection that results from a Lyme-infected tick, caught in the early stages. If you get bitten by a tick infected with Lyme disease, and don’t notice the rash, other symptoms include irregular heartbeat and weak limbs.

There are several effects of Lyme disease on humans. It affects the skin, joints and even the nervous system. Some of the symptoms include rash, neurological problems, joint pain and other less common signs. Rash is the first sign of the disease. Rashes start manifesting a few days after an infected tick bites a person. It may be the only obvious sign for several weeks before the person starts feeling pains or flu-like symptoms like fever, fatigue and headache. Rashes appear first as small red bumps at the location of the tick bite but the small red bumps increase in size after a few days. Rash caused by an infected tick is known as erythema migrans and the size is normally an indication of the amount of bacteria in the blood stream. Apart from rashes, severe pains on the knees and other joints may develop after some weeks. Sometimes, the infection also leads to meningitis, Bell’s palsy and impaired muscle movement.

Other complications that arise from not treating your infection include, neck stiffness, severe headaches and meningitis or inflammation of the spinal cord. You may experience shooting pains in your body or muscles that disrupt sleep, increased dizziness and heart palpitations due to an irregular heartbeat. Severe cases develop into joint swelling, numbness or tingling in the extremities and short-term memory loss. 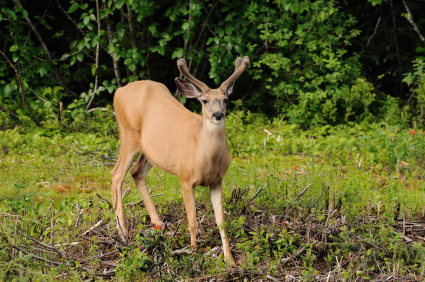 The blacklegged tick, or Ixodes scapularis is a common tick found most anywhere in the U.S. It’s also been called a deer tick and is identifiable by its long legs. This tick typically inhabits brushy and woody areas. The tick nymphs feed on small animals such as mice and squirrels, while the adults prefer deer. If you have deer in your area, you are bound to have these ticks. Another common tick, the American dog tick or Dermacentor variabilis commonly inhabits the Eastern part of the U.S. American dog ticks are carriers of Rocky Mountain spotted fever and are not as common as deer ticks. The Lone star tick or Amblyomma americanum, distributed throughout the U.S., is also a carrier of Rocky Mountain spotted fever and tick paralysis in both dogs and humans. Another common tick, the Groundhog tick, or Ixodes cookie is orange and less common than the three other ticks. It is found east of the Rockies to South Dakota. 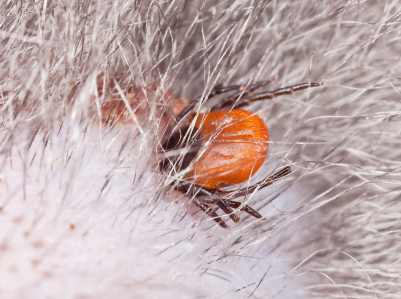 Preventing tick bites starts with ensuring that you are fully clothed when you venture outdoors into tall grasses, shrubs or bushes. Ticks wait at the end of long grasses to catch a ride on unsuspecting hosts. Wear light-colored clothing when working outdoors and spray on insect repellant on clothing. Walk in the middle of trails and try avoiding brushing up against bushes, grasses or low hanging trees. If you find ticks on your clothes, remove them by balling up a piece of tape and touching the tape to the tick.

Control Ticks Around Your Home

Keep grasses cut short and a sunny area in your yard. Ticks don’t like the sun and wait in shady areas on brush and grasses. Keep your backyard free of ticks by ensuring the grasses are set back from the woods around your home by eight feet. Place a three-foot wood chip, gravel or mulch border area between grassy edges and tick-prone zones. Invite birds that thrive on ticks into your yard by supplying bird food and water.

Some of the symptoms of Lyme disease are the same with the signs of other health disorders such as chronic fatigue syndrome, depression, fibromyalgia and viral infections. The similarities in the symptoms make it quite demanding to correctly diagnose Lyme disease. As a result, it is not enough to conclude the presence of the disease without conducting a confirmatory test. Some of the important tests to take include Enzyme-linked immunosorbent assay test, Western blot test and the Polymerase chain reaction test.

Since Lyme disease is caused by ticks, the most important way of preventing the disease is by avoiding any contact with ticks. Some effective ways of doing this include wearing trousers and long sleeves in areas where ticks are present, using insect repellents and bush clearing. Insect repellents are used by applying them on the hands, legs or any exposed part of the body. The major constituent in the repellent is N, N-Diethyl-meta-toluamide (DEET) and it is encouraged to use repellents with DEET concentration that is between ten and thirty percent. Ticks should be removed with tweezers instead of bare hands. Pets and the environment should be regularly cleaned to prevent the presence of ticks.

More information on Lyme disease can be obtained through these links: