Ewww! Nobody likes creepy crawlers! Most of my friends want to squash bugs as soon as they see them. Even though we hate hugs, they still play an important part in our lives. You would be surprised to know that millions of bugs live on our skin, hair, and eyelashes. In fact, our body has worms and microscopic bacteria that feed on our intestines. Bugs act the same as humans. They like to socialize and chew on food with their mighty jaws. Some bugs actually drink the blood of other creatures through a tube, such as the mosquito. Ants build entire colonies and even have a queen that reproduces more ants for the benefit of the colony. Ants are hard workers. Believe it or not, ants can lift up to fifty times their body weigh!

Bugs surely are unique and abundant creatures! Scientists estimate that the world has well over ten million known species of insects and bugs. Billions of bugs can live on just one plot of land. Luckily for humans, bugs remain small and rarely introduces harm. Some bugs and insects only live in a small section of South America, and may only measure a couple of inches in length and width. Even though bugs remain small and physically non-threatening, some species may cause harm to crops and even us if eaten! Be very careful of what you put into your mouth! Bugs are everywhere!

Follow these links to learn more about bugs and insects: 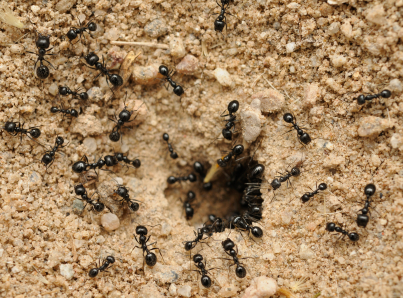